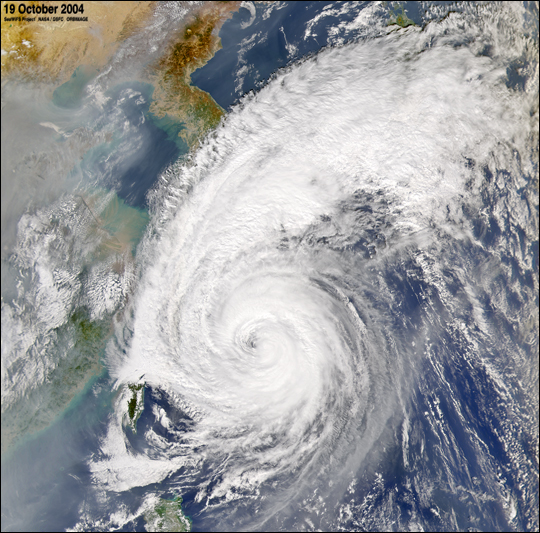 typhoon and dust on east asia, courtesy of nasa ()


back in march 2015, we had the chance to meet in beijing several environmental specialists from the us state department as well as the china mission (the famous entity running the pm2.5 monitors in the beijing us embassy).

among all the topics that were addressed, there is one worth writing about, namely the "nowcast" system. this system used by the us epa to convert the raw pollutants readings, expressed in µg/m3 or ppb, into the aqi (scale from 0 to 500). it is used for all the aqi values reported on the website.

the concept behind the nowcast is to compensate the "24 hours averaging", which should be used when converting concentrations to aqi. the reason for this averaging is that the specifies that each of the levels of health concern (i.e. good, moderate,... unhealthy...) is valid under a 24 hours exposure[1]. for example, when seeing a 188 aqi (unhealthy), one need to read it as "if i stay out for 24 hours, and the aqi is 188 during those 24 hours, then the health effect is unhealthy". this is quite different from saying that "if the aqi reported now is 188, then the health effect is unhealthy".

the problem is that the 24 hours averaging is a very bad idea, and should abolished[3] for at least those two reasons: this is for those reasons that the us epa introduced the nowcast system: it is an alternative conversion formula used to counter balance the need for averaging under changing air quality conditions. from , it is described as:

the formula used to calculate the nowcast aqi might seem barbarian for non-scientist.

but actually, it is quite simple when looking at this applied example for beijing air quality.


the result from the nowcast calculated aqi is still very pronounced in terms of averaging, at least much more than what one living in the asian dust would expect. one of the reasons is that the weight factor, which used to determine the level of change, has a threshold set to a minimum of 0.5, while in actual fact, its value is much lower than 0.5 is many cases. the following graph shows this threshold weight factor, where red is used to denote those weigths below 0.5

the nowcast formula, as it is defined nowdays, is the fruit of the research based on air quality levels in america. while for usa it gives an accurate reporting of the current conditions, it might not be the case of asia where the dynamic of air quality is much more strong. for this reason, we do believe that the nowcast formula should be adapted for each continents. for asia, it could be defined as wmin = 1/10 and n = 3 , corresponding to the following graph:

if you want, you can also directly change the two paramters yourself: wmin = and n =
for reference, instant aqi:


for now, the conversion formula used on the world air quality index project as well as the china mission aqi (aka the beijing us embassy, shanghai us consulate, etc..) is still based on the "instant aqi", a.k.a "instantcast" (i.e. no averaging at all). but, based on the outcome of this "asian nowcast" proposal, this might be updated quite soon.


[1] the 24 hours duration is based on decades of used to correlate the air pollution exposure and increased risk for health. there are new ongoing epidemiological studies to correlate the effect of instant exposure (i.e. exposure of around 1 hour or less), but it can take several years before their results can be converted to a new offical "instant aqi scale".
[2] strong wind have quite often an effect on increasing the pm10 aqi due to the dust resuspension.
[3] at the time of writing , in march 2015, there were many countries still providing only 24 hours average. nowdays, in september 2016, the only two known countries still providing only 24 hours average are and . all other countries are providing not only unaverage (hourly) data, but also individual concentration for each pollutant.


to know more about air quality and pollution, check the or the .

usage notice: all the air quality data are unvalidated at the time of publication, and due to quality assurance these data may be amended, without notice, at any time. the world air quality index project has exercised all reasonable skill and care in compiling the contents of this information and under no circumstances will the world air quality index project team or its agents be liable in contract, tort or otherwise for any loss, injury or damage arising directly or indirectly from the supply of this data.